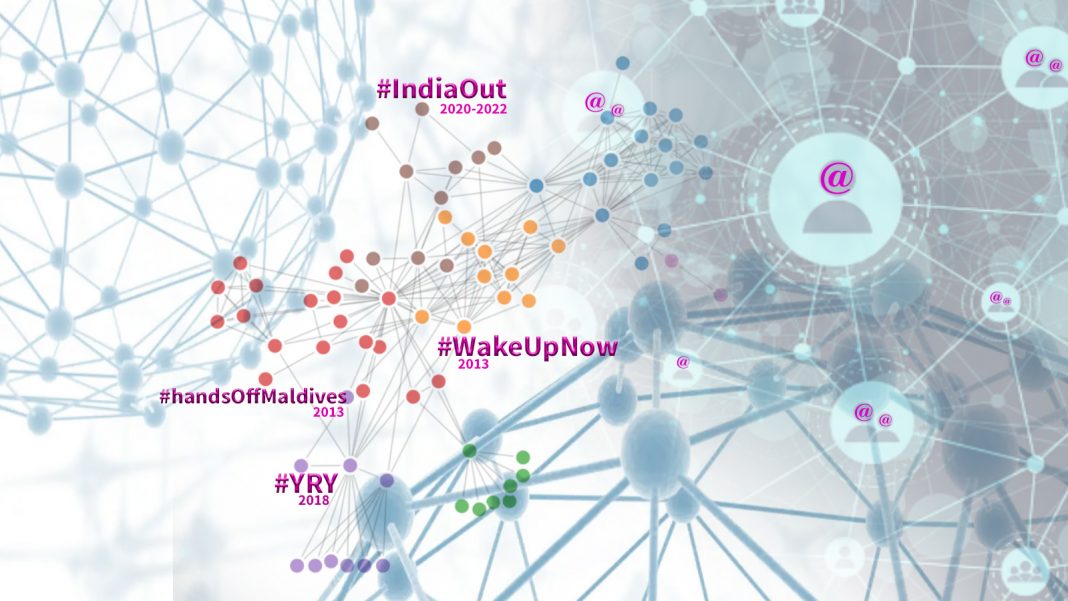 For most of us, the voice of resistance for India within Maldives, emerged as President Ibrahim Solih won the 2018 presidential elections. Within the last four years, there has been numerous reports and attempts at understanding the entire foundation and purpose behind the ‘India Out.’ For anyone, the answer might be same that:

By the end of reading this report you will start questioning these understandings, as we try to present to you the misconceptions being aired by some external agents.

With the crackdown on democracy, the cordial relationship shared between Maldives and India severed as Abdulla Yameen rose to power in 2013. Even though the campaign was officially launched in 2020, the anti-rhetoric sentiments existed even before that. Deep analysis shows that ‘India Out’ in Maldives existed since the time of ex President Mohamed Nasheed (2012, 13). The findings also hinted that a group which had largely contributed in overthrowing Nasheed, is also the same group that is leading this propaganda campaign.

Before we understand anti Govt sentiments or #IndiaOut, we must learn what #WakeUpNow is all about. A twitter ID named WakeUpNow was first created in 22nd August 2013. They also have a fb community. The entity identifies itself as a youth movement that had an instrumental role in stopping ex President Mohamed Nasheed’s bid for re-elections in 2013.

Maldives was chaotic in its transitioning stage from ‘dictatorship to democracy’ in 2008. The people were still susceptible to changes, Nasheed may have come out too strong as a liberal for a nation who was very much hardlined to extreme religious beliefs. The coup that followed in 2012, dethroning Nasheed was basically the work of people who benefited by portraying Nasheed as anti-Islamic. This narrative that was being build around the MDP leader, also contributed largely to him not winning the 2013 elections. It is without a say that there were also other reasons that caused him his defeat. The continuous attack to his candidacy for re-elections, paraded the social space under the #WakeUpNow movement.

This so called ‘woke’ movement was started by Ihsan A. Naseer, who also goes on to share that Yameen had approached him to become his political appointee. Yameen was

impressed seeing the tremendous job Ihsan and his boys, which includes Ahmed Azaan, co-founder of dhiyares, were doing in terms of d-popularizing Nasheed.

Image: Screenshots showing that WakeUpNow and Ahmed Azaan formed an alliance with Yameen for his elections in 2014. Its not understood how forming an alliance and not supporting, goes hand in hand together.

It was also observed that around 10-15 people managed the twitter ID. Below, shows a sample of tweets posted by the individuals with their initials mentioned.

The 2013 elections was one of the most sought after elections. It was scheduled, annulled and contested three times on three different days, respectively 7th Sept, 9th Nov and 16th Nov. It was observed that prior to the day set for contesting the elections, near about 10 IDs would spam tweets all day along. This was repetitive on all three days. Most of their tweets would be copy paste. The tweets can be previewed as follows:

According to the tweet sample, it can be seen that mostly same IDs would take part in it. With one sending out the first tweet, in this case Ahmed Azaan posting the content simultaneously in Oct and Nov 2013, close to elections. This would then be picked by these IDs who would try to create a buzz.

Also, upon researching the IDs, it was found that most of them happened to be bots, perhaps being monitored by one person or more. Many of these IDs creation date also happens to be around Aug-Sept 2013. 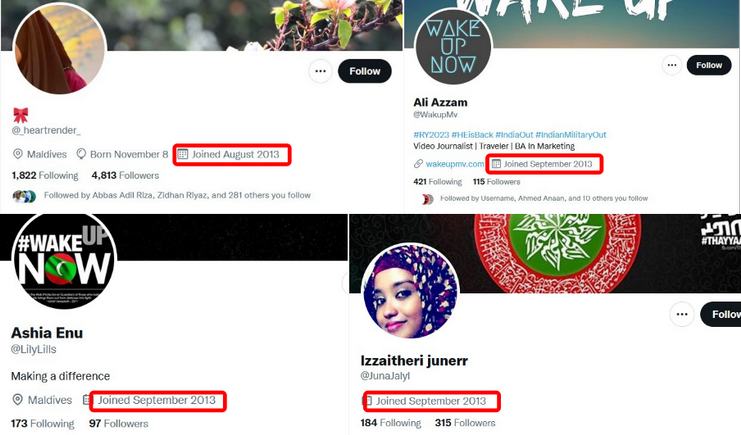 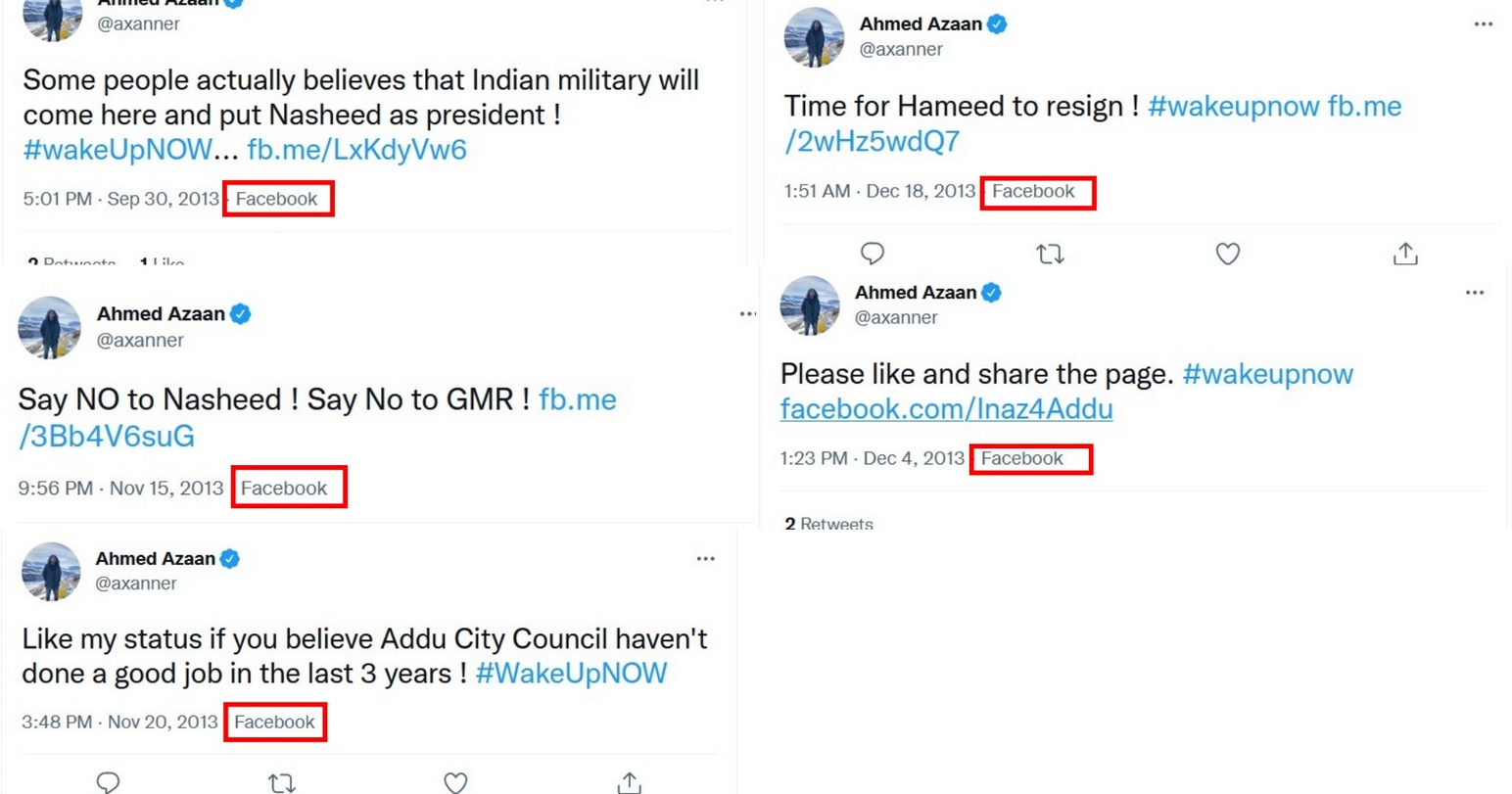 WakeUpNow, the twitter ID became less active as Yameen went on to win the elections in Nov 2013. In early 2016, the ID sort of started PR for Yameen again but entirely stopped from July of 2016. There has been no activity reported since then.

The formation of Yameen’s dream team:

Ahmed Azaan who is the main campaigner for Yameen in today’s time, was also an integral member (part) of WakeUpNow team. All of his tweets under the hashtag were largely against Nasheed and anything anti India. This let us to an understanding that the lad has always been an active campaigner almost all his life. Interestingly, Azaan was also one of the pioneers to use #handsoffMaldives, which dates back to Sept 2013. This hashtag was the earliest form to incite hate against India and the relationship Maldives shared with its foreign ally. In this regard, we can say the findings indicate that the campaign was not launched in 2020, but rather it was at work since 2013. With time, #handsoffMaldives of 2013 evolved into #IndiaOut in 2020. 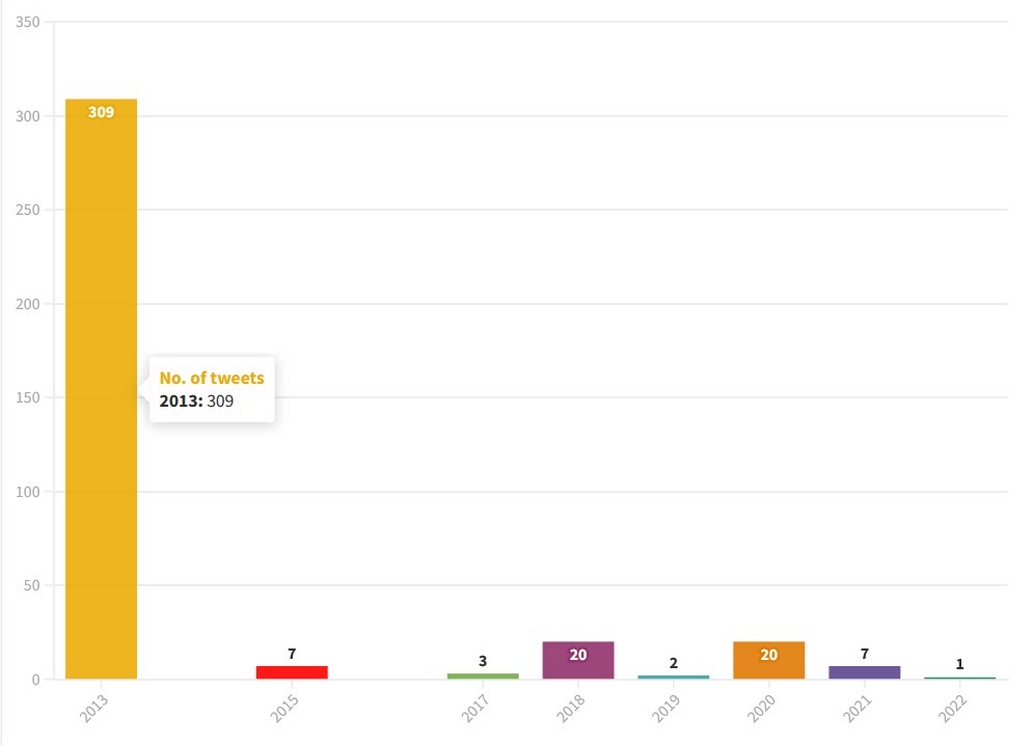 (Fig: Data representation showing tweets made from 2013-2022 under #handsoffMaldives)

Ihsan A. Naseer rejected Yameen’s offer to become his political appointee. Yameen might have diverted his interest towards Azaan who at that time was in the nurturing stage to become his golden boy. Ahmed Azaan eventually got sponsored for his education in ADA University, Azerbaijan from 2015-2019 by Yameen, and the two have maintained good relations. 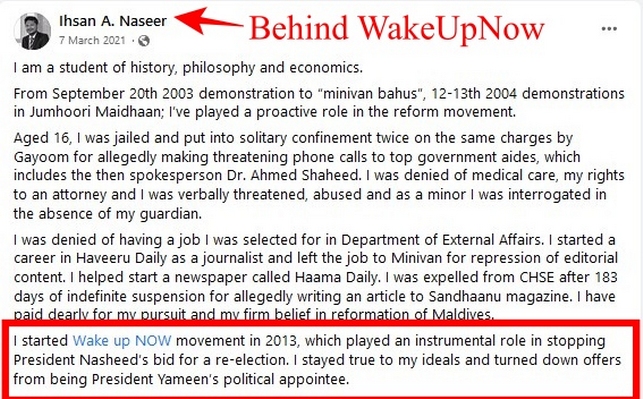 Unlike WakeUpNow, #handsoffMaldives stayed relevant till 2021. Though the usage of it peaked during and before 2019, it still had moderate inflow of tweets under it till 2021. The following tweets will give you an idea, how #handsoffMaldives was used to create this entire fear mongering aura regarding military presence, annexation of freedom and threat to sovereignty to benefit Yameen’s political career in this case. 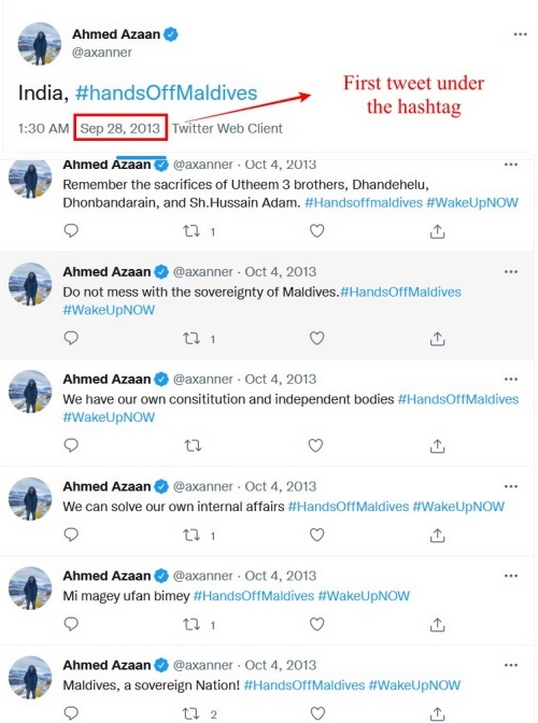 The Pattern Continues in 2018 elections:

Same anti-Nasheed stance surfaced as the 2018 elections approached. Though Nasheed’s probability of contesting the 2018 elections were close to none, with Yameen sacking him under terror charges. The social media team made sure that he wouldn’t get to contest at all. Nasheed then had to put his trust on President Ibu Solih to win the elections, defeating Yameen.

Previously, we had published a report documenting, how chains of sponsored news websites emerged as the highly anticipated elections neared the date in 2018. 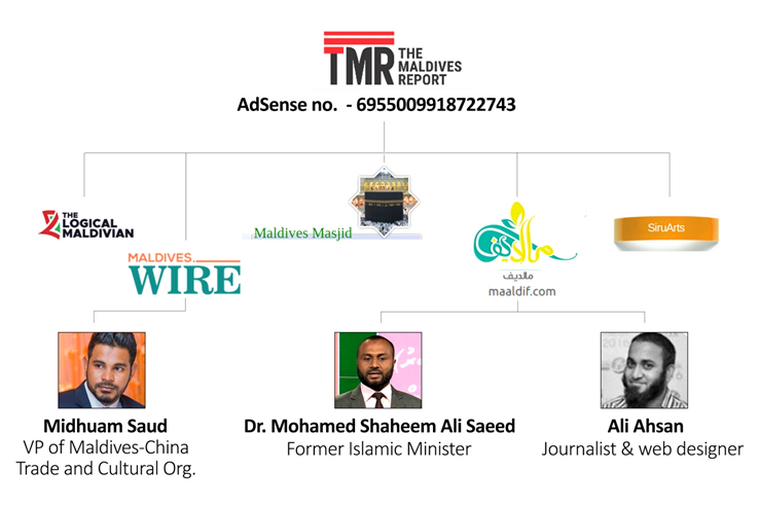 These networks were involved in spreading misinformation. Their activity included creating doubts and listing demerits in MDP, suggesting that they are in support with Indian military to launch a coup against the then incumbent government.

‘Why Raees Yameen’ is a team of people who had been appointed by Yameen to handle and manage his media presence. The twitter account was created in June 2018. 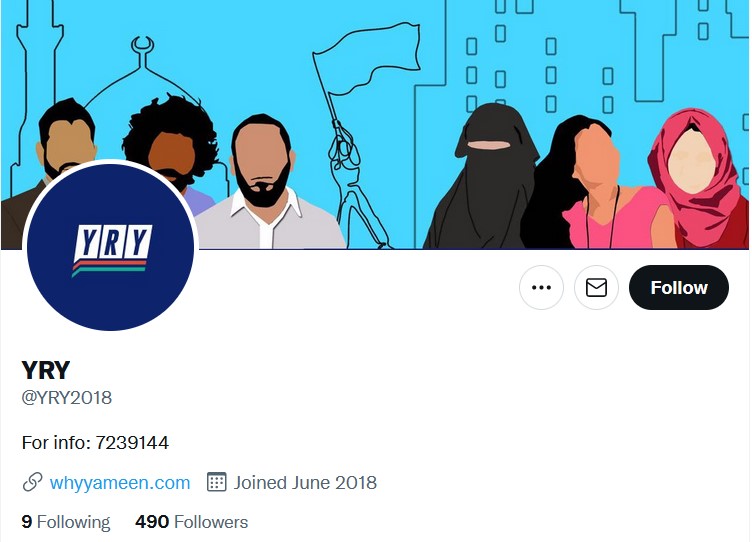 The key members of this team were: 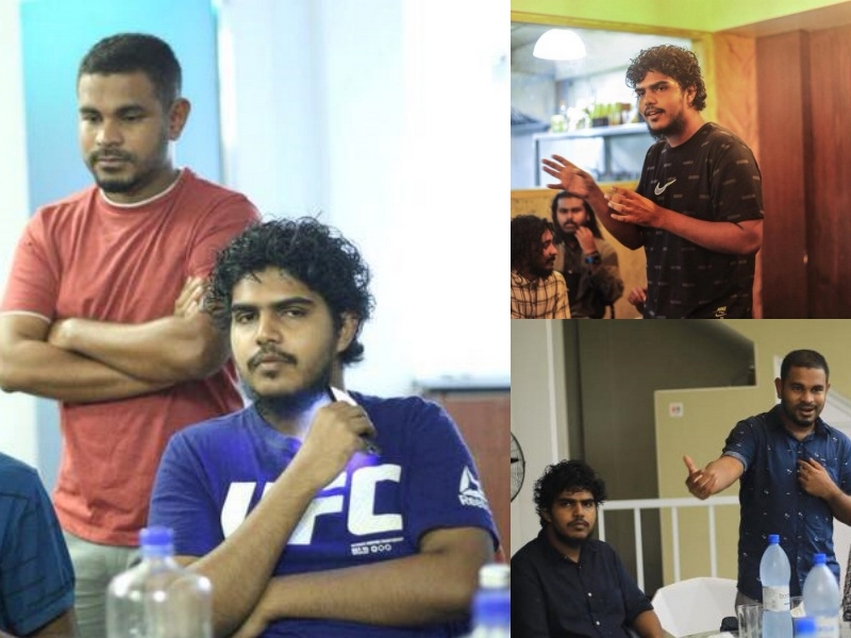 (Image: Azaan and Saud in workshops organized by YRY before elections)

YRY was an initiation by Saud. He is the Vice-President of the Maldives-China Trade and Cultural Organization (MCTCO). Saud used to be a contributor writer in Maldives wire. According to our previous report, it is believed that some networks were getting funded by foreign agents to display their interest best within Maldives (refer to the above image). This included defaming and discrediting MDP and its relationship with neighboring India. Some MPs in the past have alleged that the campaign (#IndiaOut) is China-funded. Others have said that it was being managed by criminals, gangs, drug dealers and extremists.

Maybe it was the mutual appreciation towards China, that Yameen and Suad eventually shared close ties. 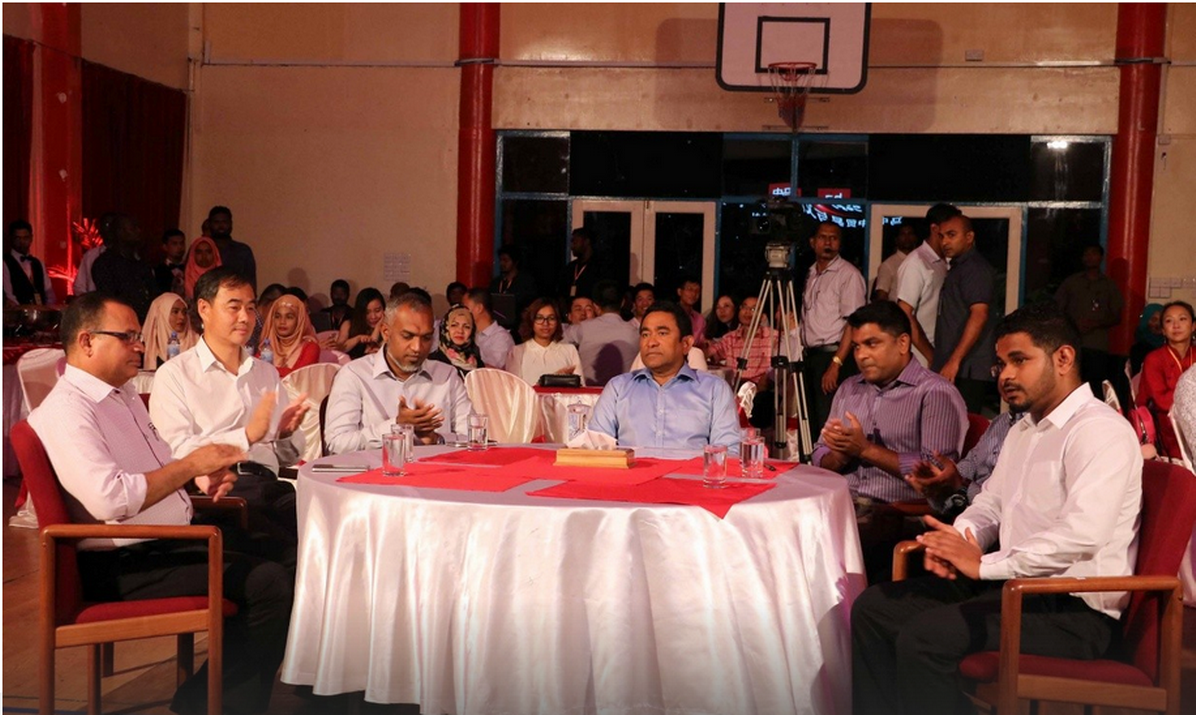 Much of this campaign has been sustained by four sources – political parties (i.e., opposition), social media, traditional media, and China. There could be many other foreign entities that could be backing the corrupt political leader and his team, but China and Pakistan’s involvement can be seen most evidently in many cases.

An analysis of the PR activities under #YRY 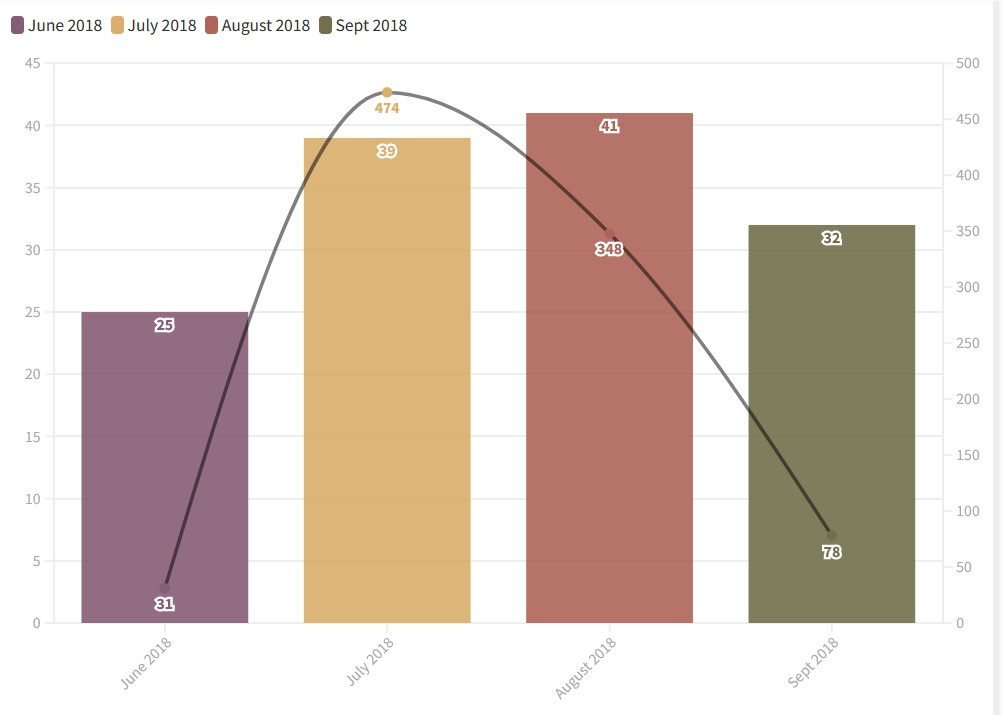 The above graph also shows that the most number of tweets were made in July and August, a total of 822 right before the elections in Sept 2018. The purpose of ‘Why Raees Yameen’ also vanished as Yameen went on to lose the 2018 elections. Things didn’t die down there for the campaigners. If anything, the motive only grew stronger.

In Sep of 2019, Dhiyares was registered. The co-founders being:

Dhiyares is a dhivehi news site, it also has an English edition named, ‘The Maldives Journal.’ Since the beginning of their publication, they have always projected this narrative that target developmental projects Maldives have with India. They also accuse India of facilitating Yameen’s arrest. Besides posting very click baiting contents, that sometimes has no credibility, the site has contributed a lot in making this campaign take a xenophobic turn. The English edition, Maldives Journal has a total of 1800 articles at the time of writing this report and more than 300 are identified as anti-India content.

Lets look at the timeline of what events led to the creation of Dhiyares:

A month ahead of Yameen’s conviction in the MMPRC case, the website was created. This was in an attempt to gain support for Yameen.

As soon as Yameen’s money laundering trial begins in July of 2019, the #IndiaOut started making a buzz. Lets refer to the table below:

It is safe to assume that India Out was triggered for the political benefit of Yameen. Each time Yameen was found in a compromised position, the social media would be amplified with anti-India sentiments.

Also the copy paste mechanisms that was used in #Wakeupnow, #handsOffMaldives, #IndiaOut indicates that campaign on Twitter is organised around a few users (affiliated with the opposition) with relatively fewer original tweets that are retweeted.

Let’s compare the previous #IndiaOut analysis to the recent data: It can be anticipated that the number of fake ID creations will surge higher in 2023, around the time of elections. Through the data table and the graphs, it is clear that the tweets under #IndiaOut has remain constant, the inflow has neither increased nor decreased. Though there isn’t a change in the social media space, the on ground activities has toned down a lot. In April, President Solih issued a decree banning the opposition’s ‘India Out’ campaign.

When the current government took over, Maldives was very much isolated from the international community. Despite President Solih’s declaration that the nation’s foreign relations with any country will not be allowed to impede its sovereignty, Yameen’s loyal campaigners have always tried to arouse public emotions around something that’s a non-issue. The presidential order came after the country’s National Security Council decided that the campaign “to incite hatred against India” is a “threat to national security.” It was decided that not acting to prevent this would make it difficult for Maldives to safeguard its independence and the lives of its nationals living or traveling abroad and of foreigners living in the archipelago.

Data assessment findings reveal that it is a:

Tap to download the: PDF file of the entire report